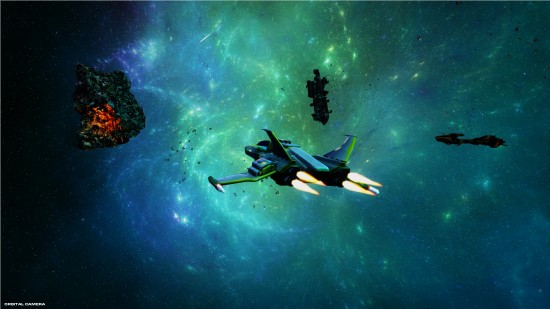 COMING SOON TO A BUILD NEAR YOU

We are working hard on the next build which contains a bunch of new tweaks, fixes etc. We have updated the changelog with new items, so be sure to keep checking it, as there are a few nasty ones in there which you need to watch out for until we get around to fixing them.

The biggest addition will be the AI controlled defense systems on the stations, carrier and planetary defense systems. This will allow them to detect, track, and fire (guns and missiles) on targets.

The default setting is to engage ALL targets. We did this so that it presents a challenge for everyone as we continue to tweak and test their operations. So you can test your combat skills in space and on planets against these defense systems. You will gain CEP for destroying these systems.

The station/carrier turrets can all be individually targeted and destroyed. They auto-repair after a period of time. The planetary defense systems (fixed and mobile) can be destroyed (same as aircraft) and they too rebuild over time. Check the game’s online dB to see what some of these assets look like.

Once we are happy with the AI, logistics etc, we will then enable the ability to control them via a terminal. Using the terminal, defense systems can then be disabled or set to fire at hostiles or all (default) targets. In the final game, you will need a certain CTC to be able to control this setting. So the idea is that as a GALCOM military, you can go into Starguard, then activate its defense systems to fire at all detected Insurgents within range. Then an Insurgent will have to get into Starguard and change it. This interface works similar to how the detention hold interface works. So it’s pretty simple.

NEXT IN THE DEV SCHEDULE

In case you didn’t notice, the roadmap is now up. It contains everything left to do on the PC version in the next few months before we hit the RELEASE IT button shortly thereafter.

After we finish the AI defense systems, we’re going to unlock vehicles (instead of androids) because we need to have those fully tested with the major networking revisions we did a few revisions ago for the aircraft.

Once vehicles are out, then we do the AI androids – which will operate similar to the defense systems.

From that point on, we will focus on plugging in and testing the World Events; then just whittle down the roadmap list from there.

In addition to the weapon model revisions, we are also doing a lot of asset revisions in order to improve the visual quality of some (e.g. low quality textures inside stations, on some buildings etc) which were created several years ago, and which can now be improved upon due to engine features and performance improvements. That’s what the “World Asset Improvement Pass” item in the CONTENT section of the roadmap is about.

Though it doesn’t appear that way right now due to various elements which are either missing or in development, we are still focusing on the game being pure PvP. There NO plans – now or ever – to implement missions, quests, or anything that focuses on PvE elements. It’s NOT and NEVER was that kind of game.

The game’s custom engine, architecture, world size, scope, features etc – are all geared toward that. The World Events are specific to that design. The reason for this is that it allows post-release expansion for planned features such as base building, mining, trading, player controlled capital (carrier, cruiser, transport) ships, and expansion of the world as per the IP etc. So deviating from this original design and into the realms of PvE will kill all those plans.

For now, all we need is for people to keep testing and breaking things so that we can have a smooth release day. Don’t get caught up in the “population Catch-22” situation whereby if you login and the server is empty, you leave. It’s immaterial how many people are on the server. Due to the game’s design, you can test, explore and do everything solo. Just like we do during development. When the time comes and all the features are implemented, tested and in place, we will schedule weekend free play events and go from there.