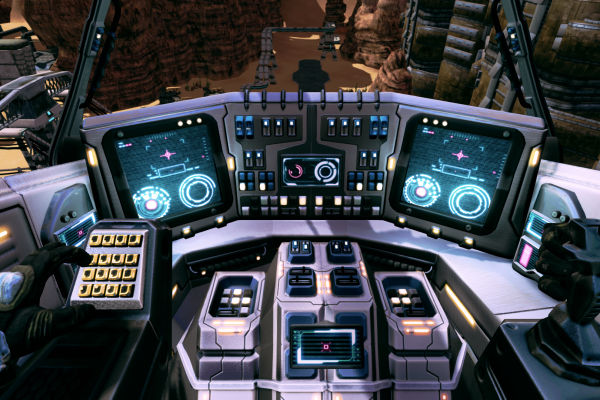 As I mentioned in the previous State Of Play (15-07-31) update, we have a lot of things going on atm. Including a lot of visual improvements which were detailed in that blog post.

In addition to visual improvements, this on-going work includes testing and unlocking the rest of the weapons, the AI and behaviors for the Hostile Intent world event, the addition of aircraft, vehicles etc.

Now that the behavior and pathfinding stuff for the androids is set, the plan forward is to unlock aircraft, vehicles, then the Hostile Intent event. From that point on, we just continue to unlock the remaining weapons and inventory items, fix bugs, do tweaks, do the other world events etc.

I think the aircraft and vehicle unlocks are going to unleash a whole new set of issues we need to address. Good thing is that we did most of that stuff over a year ago. So mostly it’s going to be tweaks (e.g. flight dynamics in space and planets), world issues (e.g. vehicles getting stuck in places they shouldn’t be in the first place) and stuff like that.

ASSET ACQUISITION AND USE (no, you can’t touch that)

In case you were wondering, the way we’ve done this is quite simple. As long as you have the required CTC, you can walk up to and activate a supply platform (works the same way as the detention hold terminals). From the menu, you can select the aircraft or vehicle that you have access to.

If you are in a station (or the carrier), you would access the supply station from the docking bay. The craft will then be created in the external docking bay, and you will be teleported into it. All you have to do then is just fly away in space, to the planet below etc. There is no enter/exit transition animation or any of that time wasting stuff.

If you are on the planet, the supply station is near the launch pads you currently see in the scenes. Same thing. Once the craft is created and you are teleported into it, you can just take off (in VTOL mode).

Of course if you have a multi-crew craft, you have to wait for your friends to join you before you take off.

Acquiring vehicles works the same way, but of course only on planets. However, unlike aircraft, vehicles are created either at the ARC or elsewhere in special areas around the scenes. Since shuttles and some gunships have the ability to tractor vehicles and aircraft, there are ways to bring vehicles to any location on the map.

Since we are not selling aircraft and vehicles, we don’t have the concept of “garages” or “ownership”. Instead, you will need the required CTC to use any such assets.

However, if you purchase an “asset-lock key”, it will allow you to create any asset (vehicle, aircraft or defense system) that you want; and be able to spawn that asset at any time. An example is if there is a fighter that you like, you can create it as long as you have the required CTC and an “asset-lock key”.

Note that assets will automatically de-spawn (disappear) from the game world after a certain period of time if nobody is using it at the time.

The Starter Kit accounts will not have the capability to requisition/create assets or purchase asset-lock keys. Though they can use whatever is out there in the game world in the same way that weapons, ammo, items can be looted from supply packs. We will have some aircraft and vehicles in the scenes when they are unlocked.

ASSET IMPROVEMENTS (yeah, we’re on it)

As part of the wrap-up work, I have gone back and reviewed a lot of the game assets, some of which were done as far back as 2010, based on the previous (we created a new engine in 2011) engine specs.

So with that, and given the new engine as well as our metrics of where we are now in terms of performance, we’re going to be using the high fidelity versions of those assets and with all new textures where needed. You can see this improvement in the FG45 assault rifle. All 30 of the weapons are going to be getting this upgrade and we expect to release them in builds as they are completed. The changelog will reflect which ones are new in each build.

Back when we did the 3D aircraft cockpits, they were built into the aircraft models. They didn’t look as good. And even though we have VR displays (seen in the transport shuttles) which I was expecting could be toggled on or off, I decided to revise the 3D cockpits anyway.

This time, we’ve been doing them from scratch and for all 21 aircraft (fighters, gunships, shuttles). We’re still not there yet with the lighting, materials etc, but here are some close to final shots of a male and female character inside the Aurora 3D cockpit.

The game is still Early Access. We are still shooting for a final release before year end; but if it doesn’t happen, it doesn’t. There is no incentive to rush the game. Which is why you should probably read the Early Access FAQ, as well as Steam’s own guidelines and advisory.