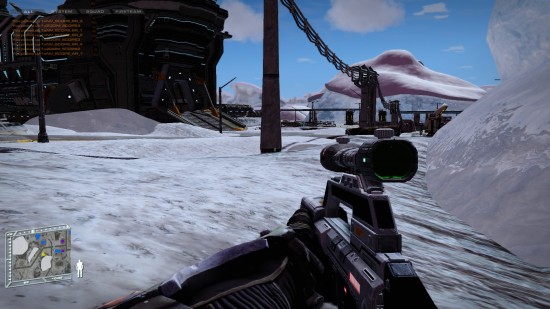 We are going to be releasing Build 00.09.05.00 later today. It is a minor incremental update, as we work toward completing the weapons, then move on full speed ahead to vehicle and aircraft unlocks.

At this point, all the scenes (space and planets), as well as the majority of the weapons and attachments have been unlocked and undergoing testing. The rocket and grenade launchers, along with the two (laser marker, target designator) weapon attachments, throwing knives, mines, and grenades, are coming in the next builds.

We’ve had some delays in implementing the Tactical Assault Bikes (TAB) dynamics (it hovers btw), which is why we haven’t unlocked it for testing yet. Hopefully they will be in next week’s build, as the first of the incoming vehicle unlocks.

The Closed Beta Test sign-up page is live once again, and will be until Tues, June 9th @ 2PM EST.

Sign-up for a chance to get a free Starter Kit which will give you immediate access to the game.

UPDATE: We ran into some problems with decals and the FX for the shot tracers. So we’ve disabled those attachments in this build.